Pt. Krishnarao Shankar Pandit of the Gwalior Gharana is acknowledged as a doyen of Hindustani Classical Music. He was born on 26th July 1893.  Pt. Krishnaraoji was groomed at a very early age by his illustrious and devoted father Pt. Shankar Pandit, who was a legend in himself and the late Ustad Nissar Hussain Khan.

Pt. Krishnarao Shankar Pandit was noted for his unique and incomparable voice, and for devoting his entire life to the service of music and its propagation among the masses. Panditji trained a number of disciples. He founded a school of music Shankar Gandharva Mahavidyalaya in Gwalior in 1914.  He was also responsible for developing an easy & independent notation system. Pt. Krishnarao Shankar Pandit has authored 8 books & his articles on music have been published in various journals & magazines. 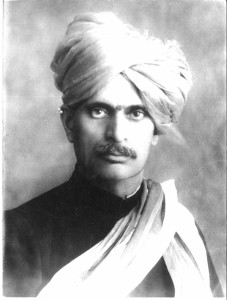 For his immense contribution to the world of Hindustani Classical Music, Pandit Krishnarao Shankar Pandit has been honored time and again by the Indian Government and institutions of repute. Here are a few of them.

Besides this, Panditji was a freedom fighter and an invitee to the All India Congress Sessions every year where he used to inspire the masses through this music.